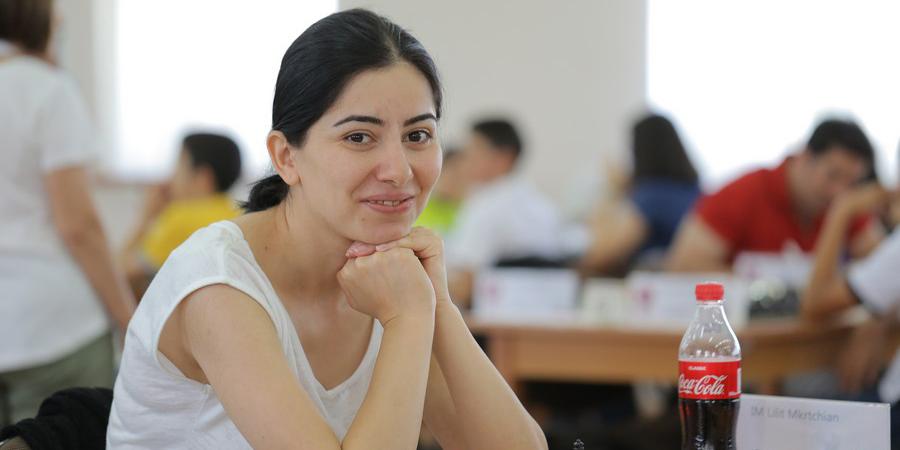 Interview with one of the leading members of Armenian women national team IM Lilit Mkrtchyan.

Lilit, accept my congratulations on the victory, please tell us about the game.

Thank you for congratulations. I want to mention that this year I also played in other tournament in Armenia, at Karen Asrian Memorial. Both there and here I faced young Armenian players with very low elo, but their level of chess is much higher than their actual elo is. This means that our young players are very talented, but as they play in few international tournaments and mostly play against each other, their elos remain the same. I felt this on my skin in Jermuk and now the same is here in «Yerevan Open». The games last long and I am managing to outplay them only in nuances. My today’s opponent, despite his 1833 elo, was playing very well, and only at the end he made a mistake in calculation and I got decisive advantage.

Yes, I like playing in Yerevan, not only in Yerevan but in all Armenian cities. And I am very happy that year by year more big international tournaments are held in our country. Before there was only a tournament in Jermuk, now «Yerevan Open», hope it will become a tradition and will have its decent place in big chess calendar. Also this year, for the first time, «Tsaghkadzor Open» will be held. This gives a very good opportunity to our young players to compete against strong international chess players.

How is the tournament organized?

The tournament is very well organized. On the 18th September a marvelous and festive opening ceremony was held. I hope our guests were satisfied with such an opening.

As for the playing venue, as a chess player, who participates in many international chess events, I can say that it is excellent; the light is very good, it is big, the air conditioning is superb, and it is very wonderfully furnished. The playing venue is one of the best that I have ever seen. Chess atmosphere prevails in the area and while walking during the game, you feel very comfortable. It is designed particularly for this tournament, which pleases ones eyes.

Lilit, there are 25 GMs and many titled players participating in the tournament, who are your main opponents?

Honestly, I don’t have a specific goal for this tournament. I just want to show my best play. As you know, in October I will play in European team chess championship, and playing in this tournament is a part of my preparation.

Lilit, now the World Cup is being held in Tbilisi, Levon Aronian is participating in the tournament, do you follow the games?

I am following all the games. I was cheering for all our participants as all Armenians do; for Hrant Melkumyan, for Robert Hovhannisyan, it was pity that they lost in the first round.

As for Levon Aronian, in recent months he shows a very good game. He plays the game which we missed and which we expect from him; the same quick and confident play, with a lot of tactics, with new and creative ideas. Till now he shows a solid game.

As a player who participated in knock-out tournament, what you think is more important in this kind of tournaments?

I played in many knock-out tournaments. I can say that this is the most difficult tournament. The price of every move is very high. You can make just one mistake and you are out of the tournament. The tournament is very tense, and because of this you spend more energy than in usual tournaments. In each match you spend as much as in a whole tournament. I am happy that Levon handles this entire well. While watching his interviews and following him online, I noticed that he does not look tired. This is also an important factor. His match against Vachier-Lagrave is the most vital and difficult one.

Thank you Lilit for your interview and I wish you success in this tournament.

Games of round 4 of Yerevan Open international chess took place today at Chess Academy of Armenia. …