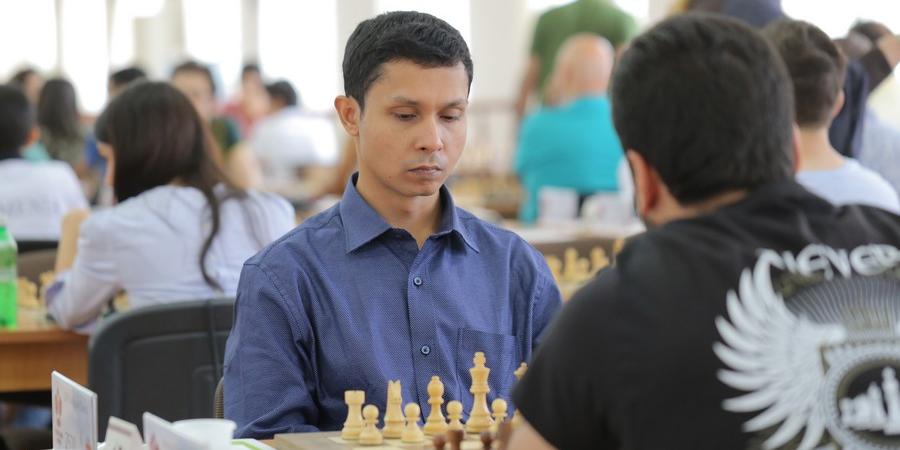 Sandipan, accept congratulations on your today’s victory. 4 rounds of the tournament are behind; please tell us about your games.

I started the tournament with a draw, but then managed to win three games in a row, so right now I am 3.5 out of 4. First game I was playing against low rated opponent, normally it should be disappointing result, but I was worse and was lucky not to lose the game. Armenia has strong chess culture and it should not be surprising that low rated players are pretty strong. The games of 2nd and 3rd rounds were not that great but in my opinion not so bad either. Today’s game was rather interesting; it was Nimzo-Indian, I was playing white, and I think my opponent prepared something, as he was playing quite fast in the opening. But then I spotted some trick and went for it; he started to think and I can’t say whether he forgot something or missed something in his preparation but he sacrificed the exchange; the game got complicated. I could just keep the exchange, but I think he had good compensation. So, instead of just sitting with exchange up I went for some tricks. It was very complex, but I played without mistakes and won the game.

You played in 1st Yerevan Open as well, how was your performance last year?

This is my second visit to Armenia, and both times I play in the same tournament. Last year, I had a bad start, but managed to win three last games and tied for the first place with a lot of other players. I can’t say that I played particularly well, but I was lucky that I won some games at the end and managed to catch up the leaders.

Yes. If I came back here, that means that I liked it first time. Chess Academy of Armenia is a great place. It is really big. The Academy is situated in the capital; that is very nice. Place is dedicated only to chess, this makes me happy. I am also staying at Academy, I am vegetarian and they are cooking specially for me. The organizer of the tournament Mr. Kalantaryan and all staff members are doing wonderful job and I am happy to be here.

The tournament is at the same time with World Cup - although it is coming to an end, and important tournament Isle of Man. So, competing with two very important tournaments Yerevan Open is doing quite well and got strong players. This is only second year and with time it will get only better.

Who are your main opponents for the first place?

I would not say that I am thinking about particular player as my opponent. I just want to enjoy my games, that what really matters me.

Your prediction of World Cup’s final. Aronian or Ding Liren?

Well, first of all I should mention yesterday’s semi-final. It was very tense and at some I could hear celebrations outside my room, and I thought oh my God, Armenians are celebrating even before Aronian has won, but later I came to know that it was Independence Day.

I think Levon is the favorite, but Ding Liren is also very strong. It will be tough match. Levon had a really tough match in semifinal. Both Levon and Ding won their semifinal matches on tie-break, but I think for Levon it was more difficult to withstand the pressure.

8 Players Lead in the Tournament

Round 6 of Yerevan Open took place yesterday at Chess Academy of Armenia. None of the 5 leaders of …

Arman Mikaelyan: "Before this decisive game, I had a bad sleep at night."

5 Players Lead the Table after Round 5

Yerevan Open international chess tournament passed the equator. Games of round 5 of the tournament …