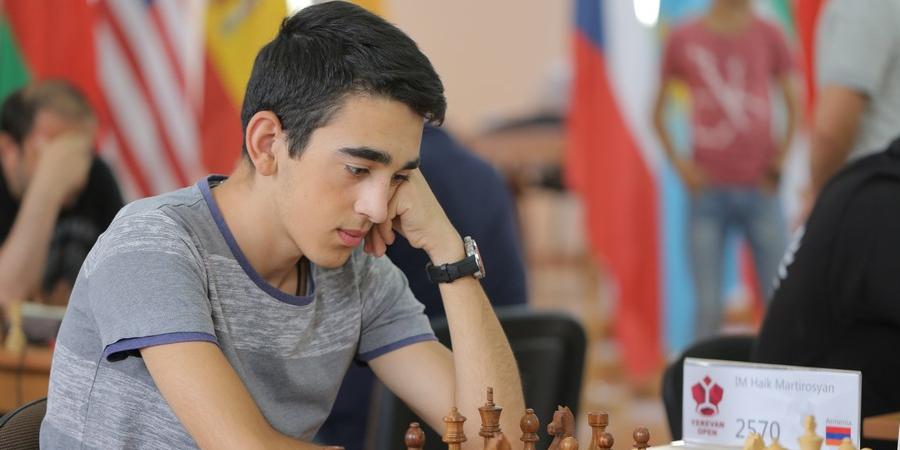 Hayk, 3 rounds are behind, you have 2.5 points. Please, tell us little bit about the games.

The first round game was very interesting game. The opening was complex, but when my opponent’s preparation finished, he mixed something, made several mistakes and I managed to win. In the second round I had more serious opponent; FM Sargis Manukyan. I was playing with black pieces but got an advantage, however because lack of time I skittled away the advantage several times, but after the increment I got decisive advantage and won the game. In the third round my opponent was experienced GM Arsen Yegiazaryan. I got some advantage from the opening, I guess at some time it should have significant, but my opponent was defending very well, I was trying to keep the pressure but could not break his defence and a draw was agreed.

Hayk isn’t it difficult to play two tournaments in a row? You just came back from European youth championship.

No. I like to play chess and enjoy playing in various tournaments and have experience in playing this way. This summer I played three tournaments in a row: I participated in K. Asrian 10th Memorial, after that in Lake Sevan round robin tournament and on the next day flow to USA to participate in match of millennials USA vs. World.

Do you enjoy playing in Yerevan?

Yes a lot. And I am very happy that Yerevan Open is being held in our city, so I am participating in this tournament with great responsibility.

How is the tournament organized?

The tournament is very well organized. There are no any problems. Overall, I like to play in Armenia and it is very good that recently so many tournaments are being organized in our homeland.

You are the rising star of Armenian chess, World U16 Champion, and all the chess fans cheer for you, does this attention motivates you?

Yes this inspires me to play better and to get more fans.

Who are your main opponents?

Many strong grandmasters and international masters are among the participants of the tournament. All of them are very strong players and have achievements in their careers. So I consider all of them as my opponents.

Levon Aronian is participating in World Cup; do you manage to watch his performance?

Yes,I very closely watch the games. Yesterday he proceeded to the final. He managed to outplay Vachier-Lagrave in a dramatic tie-break, only winning the match in “sudden death” game. I think this was the most important match as he qualified to Candidates Tournament. He accomplished his main goal for this tournament.

Buses will move from the yard of Chess Academy of Armenia. Please register for the excursions …

5 Players Lead the Table after Round 5

Yerevan Open international chess tournament passed the equator. Games of round 5 of the tournament …